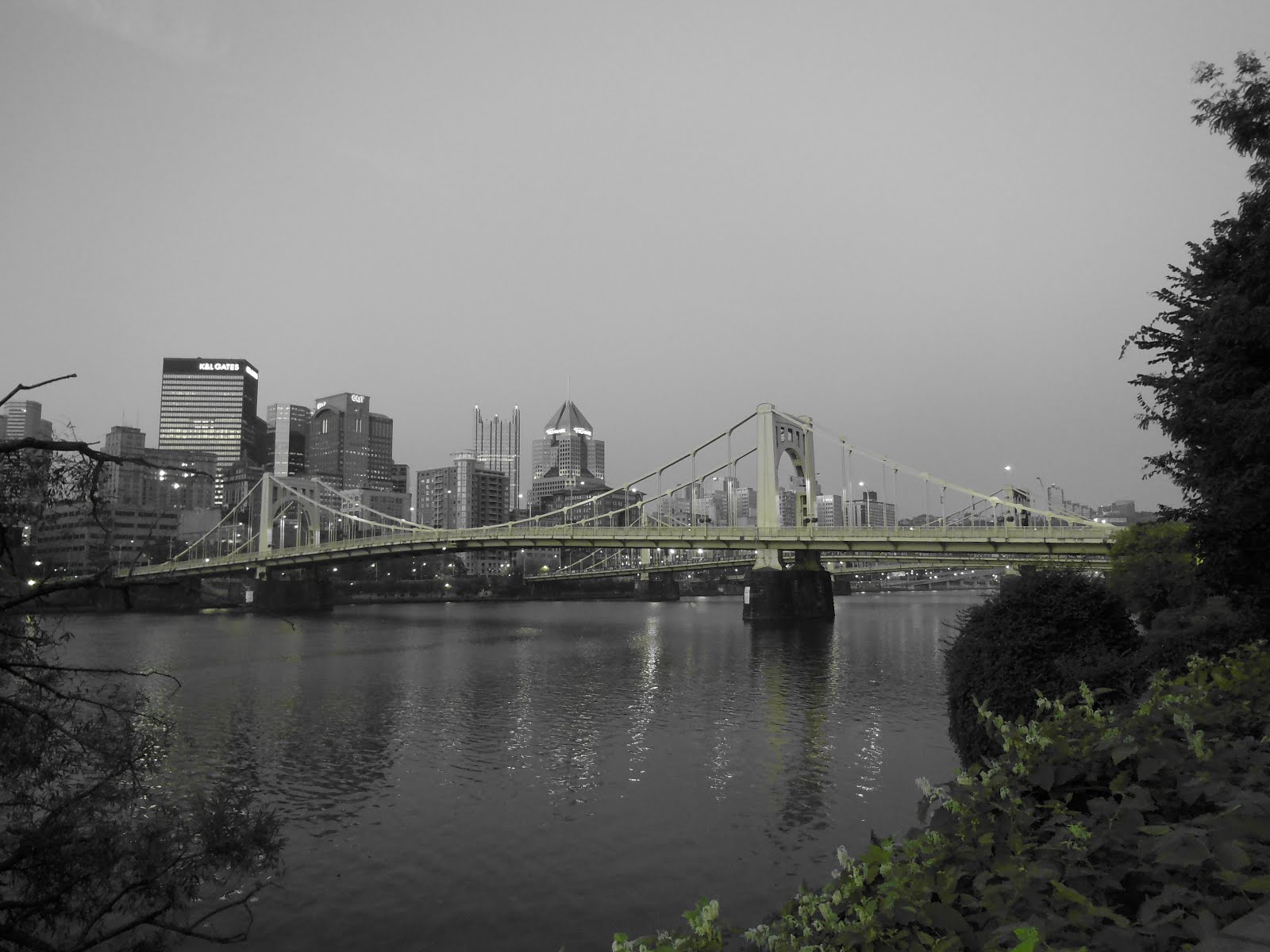 One Training Weekend to Rule Them All

This was peak week for Marshall Mangler training. This will be the last big week of training until next year. After the Mangler I will take some much needed rest and crosstraining time and begin to mentally prepare for the arduous training cycle ahead in 2016.


Tuesday, I worked on a site in West Virginia and due to downtime I had an extra long lunch and was able to squeeze 10 miles in along the Wheeling Heritage trail in an out and back. I was still a bit sore from Sunday's 21 miler, but I got it done and felt good doing so. The Wheeling Heritage trail is a little over 10 miles long and all asphalt.  I started at mile zero and went out to 5 and back.  The first 2 miles passed a snuff factory, the smell of their product filling the air. A short jaunt up the trail and one finds himself smack in the middle of a sewage treatment facility with the trail bisecting the property. After this was a scenic stretch in downtown Wheeling. This was the highlight of the first 5 miles of the trail and also had public restrooms and water fountains.  I hope to explore the second half sometime and I hope it offers more.

Wednesday I took a 2 1/2 mile run in Luna sandals around the roads near work.  I have to say the sandals felt great. I ran gravel and grass on the sides of the road when possible and they seemed to handle all types of terrain well. I am looking forward to more runs in these "flip flops".

Thursday I ran 5 miles in Oakmont and Verona. I tested out the new Hulton Bridge. It works! I got over the river dry! 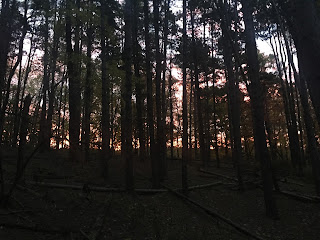 After a rest day Friday it was time to get real. Real real. Extra real with real realness in every bite. ahhh..you get it.  I woke up at 2:40 AM, stumbled towards the espresso machine and turned it on. Soon I was out the door and driving to North Park. I arrived around 3:40 and managed to get 1 mile of road in before Lamar arrived to start our pre-dawn run. We began with the Orange loop around the golf course.  A few miles in and I had to make like a bear does in the forest,  more precisely that big, blue Charmin bear.

Trailrunning Tip of the Day:  Always pack some TP!

We made it back to the cars right around 5:15 when we met Lori. This was Lori's second trail run and she had decided to come out into the forest in darkness and hoof it out for an hour or two with us! Brave girl. We ran the red-blue up to the Wisconsin Shelter. We took our time navigating the ankle twisting, rocky sections with care and crossed the road from Wisconsin to the Red trail and followed it back down to the road.  Lori parted ways at that point with 6 or 7 trail miles under her belt before the sun had cared to rise.  From here Lamar and I took the pipeline climb towards Pigeon Shelter and came back around to meet Lisa just as the sky was starting to show color.

From here we ran a complete loop of Red-Blue to Red along the Marshall Mangler course route.  There were plenty of deer and the weather was beautiful for running. The trees were in full color and the trails were covered with the fallen hands of their brethren. 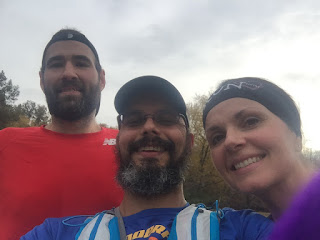 After reaching the cars Lamar and Lisa headed out and I put in 4 more miles at around a 9:30 pace. I was surprised to be able to hold that after such a long run. All said and done this training run was 26.2 miles in 5:45 with over 3400 feet of gain. Afterwards Tara and I met up with friends for an after noon at Phipps Conservatory and for Japanese/Korean at Oishii Bento in Oakland.  So. Damn.Good.

Lisa gave me a pack of Ucan generation to try out.  I will be picking up a pack or two for the mangler.  In 26 miles I had a little under 100 calories of tailwind in my water, one pack of Ucan in water, and a few Honey Stinger chews. With so little I still felt surprisingly strong for the nearly 6 hours out there.

Sunday arrived and I was up at 5 AM to get ready for the EQT 10 miler race.  I hadn't planned on racing it after Saturday's huge run.  Just getting out there and enjoying the morning with friends and getting my training miles in was the goal. My legs certainly were sore still. I donned my costume and drove down to Station Square to meet up with Lisa, my race partner, and the rest of the awesome SCRR and Runderful squad. Lisa was dressed as a nerd and I went as The Doctor, which arguably could be said a nerd too. I figured on trying to hold around a 10 pace, but likely ending up walking much of the race. As long as we could stay ahead of the 15:00 mark we were good as gold. 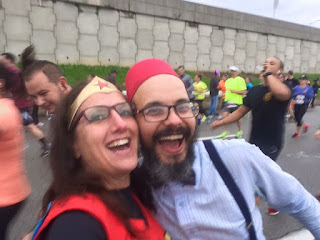 The gun went off and we began the small climb towards the West End Bridge.  At mile 1 I was surprised to see we had a 9:30 pace and my legs were loosening up. In the back of my head was the thought that this would be the opportune time for a tempo run if my body was in good enough shape to safely pull it off. Aid Station 1 was a little after mile 2 and our awesome friends Suzanne (AKA Wonder Woman) and Lori were volunteering. Selfies and water and hugs were had. Mid-race hugs should be at every race! 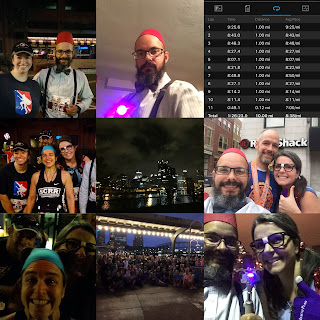 We began picking up the pace dropping into the sub 9's and I felt good still. What the hell!?  I asked Lisa what her course PR was. She said around a 8:24 pace.  I looked at my garmin and crunched the numbers.  I asked her if she wanted to go for a PR and said it was still possible in that we weren't too far off pace wise. We began modestly accelerating and I think it is safe to say neither of us really felt it too bad until maybe the last 2 miles. That said, we were not going to get Lisa a PR on that day and both of us could care less.  We ran a much faster race than either had anticipated. Lisa recovering from the Chicago Marathon and me from a long training run. 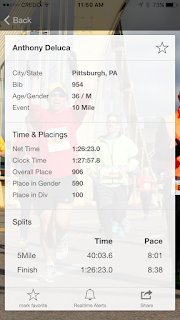 All said and done we finished with a pace of 8:38 per mile. I don't know if it was the bow tie or the sonic screwdriver or maybe the fez, but it felt like a miracle in it's own small way.

At the finish volunteers were ushering us to keep moving after the finish line. I did not know until shortly after why. Lisa asked if I saw the guy being treated by medical personnel. I hadn't.  She did. They were giving a man CPR. Unfortunately the end of this story is not a happy one.

My sincerest sympathies to the family and friends of Michael Kovacic.

If there is a lesson to be learned it is this: Life is short and one never knows how short it may be. Love those around you, care for yourself and others, and seize the day.  Don't put off showing your love to the world because in the end that is what we leave behind. The care and love we bring to the world is what is immortal in us and it is the best we have to offer.

Posted by Unknown at 1:00 PM No comments:

Gear up for the cold months ahead with a sweet Runderful hoody and tech long sleeve! The ladies cut long sleeve has a v-neck.   The order is open until 10/25/15. Details and ordering info is at the bottom of the blog page.
Posted by Unknown at 4:00 PM No comments: 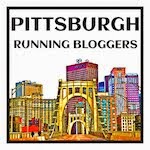